2020 was a tumultuous year and illustrated the resilience, business challenges, and unstoppable growth of SaaS. 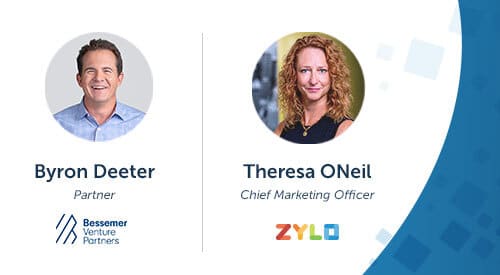 Byron Deeter kicked off the discussion with a wide-angle view of the cloud market over the last ten years. And the big picture shows big growth.

This rocketship growth was expected to continue throughout 2020, but then covid-19 hit, and many businesses froze spending in light of new uncertainty. But, Deeter notes, SaaS and the cloud represented a silver lining to the pandemic’s impact.

The Pandemic’s Impact on Cloud Markets

“I’m happy to say that I think part of the story of these horrific times has been how tech and the cloud industry has stepped up to help businesses get through this and enable business continuity,” he said. “I do think that one of the stories of this pandemic is how the cloud is saving business continuity and, therefore, the economy and a lot of jobs.”

“I do think that one of the stories of this pandemic is how the cloud is saving business continuity and, therefore, the economy and a lot of jobs.”

During COVID, public cloud software markets hit all-time highs, and these multiples have trickled down to the private markets, with investors willing to pay high prices for best-in-class assets. The global pandemic has also unlocked digital transformation initiatives that have expanded cloud companies’ total addressable markets and highlighted them as relatively safe havens for investment.

Companies across industries had to accelerate their digital transformations, lock in their virtual and remote working environments, and as a result, cloud technology and its delivery system rebounded. Companies like Zoom, Twilio, and Shopify have grown significantly in the last months in response to this demand.

What’s Next for Cloud Software?

Cloud-based software will become the majority software of choice compared to on-premises offerings. Within this decade, Deeter says, cloud-based software will comprise 75% of the overall software market. This so-called “Pacman” effect (see image) will be accompanied by even higher cloud market caps, with the public cloud market predicted to double in size within the next 12 months to reach an astounding $2 trillion cap.

Cloud and SaaS Predictions for 2021

Before moving on to Zylo’s SaaS Management Benchmarks report for 2020, Deeter shared a few predictions for the cloud and SaaS in 2021:

The future of work will be remote or remote-hybrid

As the cloud and SaaS facilitated business continuity in 2020, business leaders saw that worker productivity didn’t decrease. “People see that business can continue – and that there are actually some advantages to remote work,” Deeter said.

“People see that business can continue – and that there are actually some advantages to remote work.”

The idea of centralized decision-making for software purchasing is no longer the norm. More and more, business units and employees purchase the best software for their needs and seek technical support from their more technology-focused counterparts.

“What we’re seeing is that the best IT organizations and internal teams are becoming responsive to help as advisers and coaches to help manage the software that’s being acquired,” he said. “The best products are finally winning.”

“The best products are finally winning.”

This means instead of being sold software, consumers are purchasing software and experimenting with it incrementally and then organically distributing them throughout organizations rather than making multi-million dollar commitments upfront.

The combined and unparalleled growth of cloud software, SaaS, and product-led growth has the opportunity for smart management, cost optimization, and best practices through SaaS management.

SaaS Benchmarks for 2020 and Beyond

Theresa ONeil kicked off the SaaS Benchmarks portion of the webinar with a quick introduction to how Zylo sources the data that powers its benchmarks report.

With hundreds of customers for its SaaS management platform, Zylo’s data originates from anonymized tracking of more than $300 billion in supplier spend amongst hundreds of customers in a wide range of locations and industries. Of that spending, more than $22 billion is spent on cloud services and products, and of that $22 billion, more than $5 billion has been accurately identified as spending on SaaS in the last 12 months.

Related: How the Zylo Discovery Engine Powers the Most Comprehensive SaaS Management Platform

This analysis of real-time spending data stands in stark contrast to other industry reports that largely rely on opinion-based surveys. Surveys can reveal respondents’ beliefs about SaaS spending and other activity, but, as we’ll see later, these perceptions can be inaccurate.

Despite Budget Lockdowns, SaaS Spending Jumps 14% Annually and 26% YOY During the First Months of the Pandemic

This early jump in annual SaaS spending can be attributed to companies tooling up with resources to enable employees to transition to remote work. This hypothesis is validated by notable increases in software categories such as virtual private networks (VPNs), web and video conferencing, data security, identity management, and IT security.

SaaS is Growing Faster than CFOs and CIOs Realize

One notable result of increased spending on SaaS is a resulting lack of awareness of just how many SaaS applications the average company maintains.

Following the Zylo SaaS management platform’s implementation, businesses typically find they have underestimated the total quantity of applications within their environments two to three times.

Businesses typically find they have underestimated the total quantity of applications within their environments two to three times.

Access the full webinar for a more comprehensive analysis of the state of SaaS management within businesses, including detailed looks into how SaaS applications are acquired and managed, how increasing renewal frequency challenges business operations, and the main causes for widespread underutilization of SaaS products.

Table of Contents Use Data as Your North StarOperationalize Your Renewal...