Byron Deeter: The March toward Cloud and Its Unavoidable Impact on Your Business 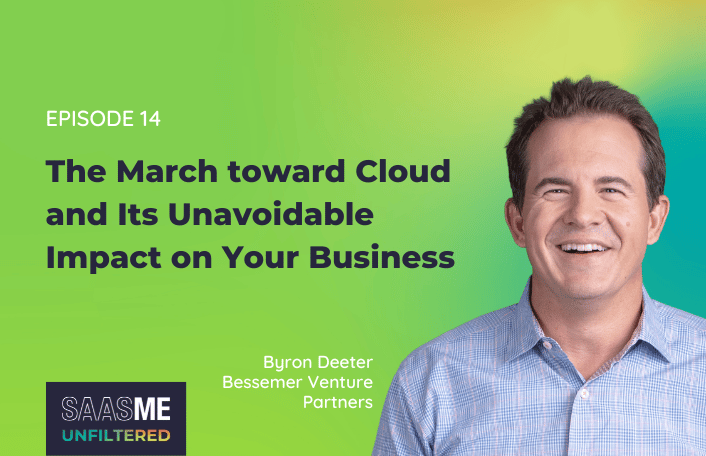 The days when on-premise was the default are long gone. According to Byron Deeter, Partner at Bessemer Venture Partners, the Cloud is the way of the future. And the march is already well underway. In this episode of SaaSMe Unfiltered, Byron dives deep into highlights from the BVP State of the Cloud report to reflect on the criticality of SaaS and how it’ll impact your business now and in the future.

In the past, on-premise software was the default. Then, 20 years ago, cloud software started to emerge, and the concept quickly gained traction.

“Fundamentally, this notion of not having to do local installs, port code bases to different software and hardware combinations – it frees up the team,” said Byron.

While on-prem still has a role to play – especially in certain industries – the cloud is now king. In fact, companies of all kinds now run their business on the cloud.

“Of course, there will be some categories that remain. There’s a role for embedded software. There’s government and military deployments where they will be entirely cut off from connectivity for all sorts of obvious reasons. But we think, for the vast majority of software in the world, that march is happening, it’s happening faster and it’s inevitable,” said Byron.

Today, the entire globe is in the midst of economic uncertainty. Yet, Byron feels optimistic that the future of the cloud is bright.

“It’s a fair point that we’re in this hunker-down mindset that we’re certainly going to be facing in the coming quarters. There may be a little bit of a give there on what companies can do, and that may take a little longer, but I think the kind of unstoppable wave of innovation will certainly dominate in the big picture,” said Byron.

“The first phrase was really just taking known product categories, moving them online. The second phase was a lot of net-new things that weren’t possible pre-internet and pre-connectivity. Now we’re seeing another horizon of this where really you’re deconstructing layers of cloud, you’re opening up APIs. And then most exciting recently is the explosion of ML and AI as you get this overlay of what’s possible. You map that with the continued progression of computing, we believe even getting into the world of quantum computing in the coming years. Our generation’s just going to see the most formative transformation in technology in the entire sum of human history, like full stop. What’s happening now and about to happen is unprecedented and is just wildly exciting to fathom.”

“The economy keeps marching on and there’s been all these enablers where people realize, okay, this can be an accelerant to cloud adoption and this can be the reason to finally make the move. COVID certainly front and center. When you went to an instant distributed workforce, you couldn’t have on-prem software. And so we had companies that were scrambling to deploy call centers and remote access to financial systems just to keep the business running. Now we’re largely through that shock deployment and they’re thinking about business optimization. Okay, what are the things that I can do to actually make our team collaborate better? And they’re thinking strategically about how can we run our business better? And so all of these things layer into what we believe are enablers for the distributed software model and this application layer that’s both browser and mobile accessed and just further pushes forward this march towards cloud adoption.”

“What’s happening now across these businesses is that they’re trying to get the best practices and they’re trying to get the best productivity and the best output. And so they’re going through and figuring out, okay which software products are actually working for our teams, what are the levers that we can use and how do we do a little bit of standardization? In many cases, there’s cost savings there, which obviously play into optimization products like Zylo, where they can actually see the catalog internally and understand what’s being used, what isn’t, and where people are getting real value and help with that evolution.”

Cloud is the New Middleware Layer, Removing Friction for Enablement

“So one of the things that’s just really compelling about modern products in cloud spaces, is that they’re just much more thoughtful in terms of integration points, data movements and capabilities that they’re offering out. And what I mean by that is the barriers have come way down in terms of connectivity now, with standard APIs, and really cloud has become in many ways the new middleware layer. And so you’ve got open integrations, and so these products are taking out the friction points for the enablement, and they’ve got  much more flexibility than in terms of how you choose to monetize.”

“I’ll differentiate two types of security. One is application product security, and I wholeheartedly believe, and the data now bears out, that cloud apps are more secure than on-prem, and there’s a number of reasons why. What you’re talking about, though, is this access layer of, okay, now that you’ve opened up APIs and you have data movements and you have the ability to bolt on financial products, as well as HR products and things, how do you control that data? And that’s where access is critically important and the team needs to have governors and a process and a methodology for understanding what apps are being provisioned, who’s allowed to do what, and that the user controls are implemented in the right way. And those are things that, as the industry matures, there are products and capabilities out there to assist with that, obviously. The CIO wants to have their hands around those things, and that’s important for the free flow of data as well as just user insights, that you don’t have confidential information floating internally, nonetheless, externally.”

“If you have an application that can be sold or consumed through a marketplace, you should be doing it. That marketplace activity is going to explode and it’s a low-friction indirect model that just compliments your direct motion. You shouldn’t bet it all on that in most cases until we see more validation. But it’s free customers, free money, in many ways, and we think companies should be pushing it and it’s taken way too long, but it’s coming in a big way.”

We’re Shifting from Unicorns to Centaurs

“These businesses that were at tiny revenue numbers raise these huge rounds of huge valuations and now have some growing pains as a result. I think it was perpetuated by this overweight focus on absolute valuations. So at the end of the day, we think that the centaur mark is the right one. We want to celebrate the companies that get to real scale. It’s a much shorter list. It’s seven times harder to do than to reach the unicorn status because you have to actually build a real business to do it. But when you’re at that scale, you’ve got complete control of your destiny. You certainly can go public and raise money at big valuations in any normalized market, but more importantly, you’ve created something that’s going to have lasting impact. And it’s a milestone that we think is the right true north for entrepreneurs out there listening.”

Looking Ahead, Best-in-Breed is the Right Answer for Cloud Buying

“One of the beauties of cloud and taking out the friction for integrations and connectivity is that crappy products don’t need to be pulled through with a good suite. And so we think customers continue to have power here and should use it. We think that they should absolutely insist on the very best product for each of their end users, for each of their business functions and force those vendors to play nice, control their own data and the market forces will prevail.”

“I feel very good about the overall innovation economy, but I think it’s a fair point that we’re in this hunker-down mindset that we’re certainly going to be facing in the coming quarters. There may be a little bit of a give there on what companies can do, and that may take a little longer, but I think the kind of unstoppable wave of innovation will certainly dominate in the big picture.”

5:49 – “What’s happening now and about to happen is unprecedented and is just wildly exciting to fathom.”

8:13 – “For the vast majority of software in the world, that march is happening, it’s happening faster and it’s inevitable.”

19:19 – “The centaur mark is the right one. We want to celebrate the companies that get to real scale.”

21:04 – “One of the beauties of cloud and taking out the friction for integrations and connectivity is that crappy products don’t need to be pulled through with a good suite.

25:50 – “I think the unstoppable wave of innovation will certainly dominate in the big picture.”

Check out other episodes here, Apple Podcasts, Spotify, or wherever you listen to podcasts. 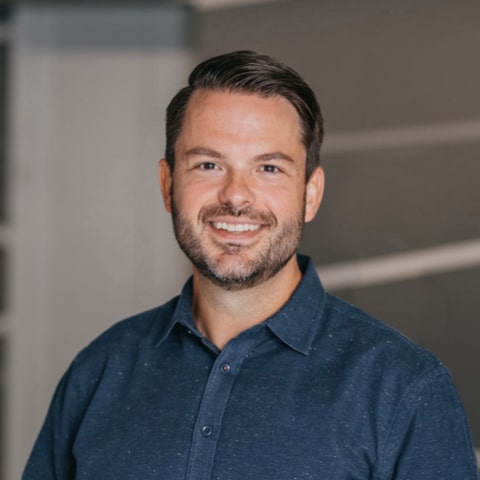