Advice from Pushpay: Stop Overpaying on SaaS Contracts and Negotiate Like a Pro 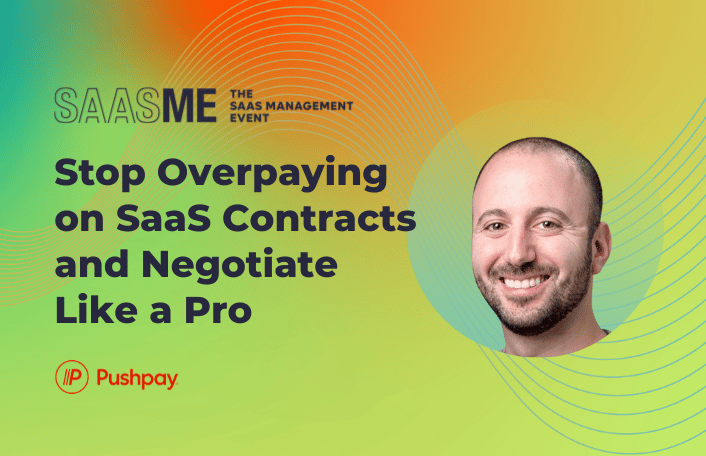 Companies of all shapes and sizes deal with SaaS sprawl — whether a startup growing rapidly or an organization that’s been in business for 50+ years.

“The idea of purchasing SaaS is a relatively new phenomenon, and companies old, young, big, and small seem to find that there’s a pain point with it, and also find that when they get to a really good place with it, they’re in a much better situation,” said Mousa Hamad, Vice President of Corporate IT and Procurement at Pushpay, in a recent session from our SaaSMe event.

Read on for Hamad’s key takeaways for how to negotiate SaaS contracts like a pro.

Hamad described a three-pronged approach to effectively negotiating as an entity.

“To become an effective negotiator, you have to fully understand your landscape,” Hamad said.

Start with a comprehensive discovery process to find your SaaS spend wherever it lurks. Then, conduct a line-by-line audit of your accounts payables, searching for contracts within emails, folders, or Slack messages, and talking to the departments who also have a vested interest in aggregating contracts (legal, finance, IT, etc.).

“You’ll probably find there are multiple repositories for contracts in your company,” Hamad said. “If multiple people are doing something, odds are nobody’s doing it fully.”

Through the discovery process, you’ll likely find cross-functional apps, which creates an opportunity to consolidate users to a single tool, then use your volume to negotiate an enterprise deal with that vendor.

“My SaaS journey started in December of 2017,” Hamad said. “I was sitting there with a big monitor on my kitchen table combing through files and emails and everything I could to find contracts. That was not a happy place. But eventually, if you do it right and you get everybody involved, you do get to a happy place where you have all your contracts in one place and you’re out ahead of renewals.”

Discovery doesn’t have to be a game of hide-and-seek. Create a process for acquisition and renewal tracking, and invest in a SaaS Management platform for help.

As a procurement professional, you want to be approachable and establish a culture of open communication so your team feels comfortable asking you about software ideas. It puts you ahead of purchasing trends the business may have.

“If you have partners within the business, and you’re able to have them ride alongside you in a contract renewal or a new tool contract discussion, you’re going to be that much more effective in terms of the conversation and the perspectives you can bring to the negotiation,” Hamad said.

Use these tips from Hamad to negotiate like a pro and stop overpaying for SaaS contracts.

1. Preparation Puts You in the Driver’s Seat

Set alerts for 90 days prior to SaaS renewal to gain leverage in the negotiation.

“When I go into a negotiation, I have an account executive on the other side who’s trying to achieve the same outcome I am, which is to get the best possible deal for everybody involved so we can all walk away happy,” Hamad said.

When you come early and open the possibility of an open bid, the account executive can use that lever with management and the deal desk to help keep the cost down.

“You can still look at this as a partnership with the AE, and be upfront about it by saying, ‘We’re trying to establish that we can’t have our costs go up very high on this. We’re trying to empower ourselves to be in a position to make the best decision. And we think that by being transparent with you about this, it’ll empower you to give us the best deal, and everybody can walk away happy,’” Hamad said.

Procurement needs to track the temperature of its SaaS vendor relationships and utilize that information in negotiations. For example, if you’ve experienced outages and multiple CSMs in a short period of time, you’re not getting the value you deserve.

“If there’s any stink around the dynamic of the relationship and response times, a company would be remiss to not hear you and at least do the one thing they can, which is impact the bottom line,” Hamad said.

Hamad described a negotiation as an act.

“There’s an element of deciding how you’re going to present yourself, and part of that is having somebody internally you can play off of to help drive an outcome,” Hamad said. “We’ve been doing good cop, bad cop since the dawn of time, so it’s not like I’m reinventing the wheel, but I make it very obvious.

“In order to get a more fair shake out of a vendor on price, [I say] ‘I’m bringing the person who’s bringing another vendor in that they want us to seriously look at,’” Hamad added. “‘I need you to help me win them over. Oh, and guess what? They control the purse strings, too.’”

Involving stakeholders makes them more invested in the outcomes.

Hamad’s tried and true tip is being open and transparent with vendors.

“Building relationships and being viewed as transparent makes it to the point where you don’t have to fight vendors anymore,” Hamad said. “It just becomes making deals with people you respect, and there’s mutual admiration and a desire to get the deal done.”

Lastly, celebrate together. Scoring a great deal drives value for your business, and should be seen and appreciated.

“When we negotiate a great contract, we tell everybody internally,” Hamad said. “And people want to have their name associated with that, because it’s a nice win.”