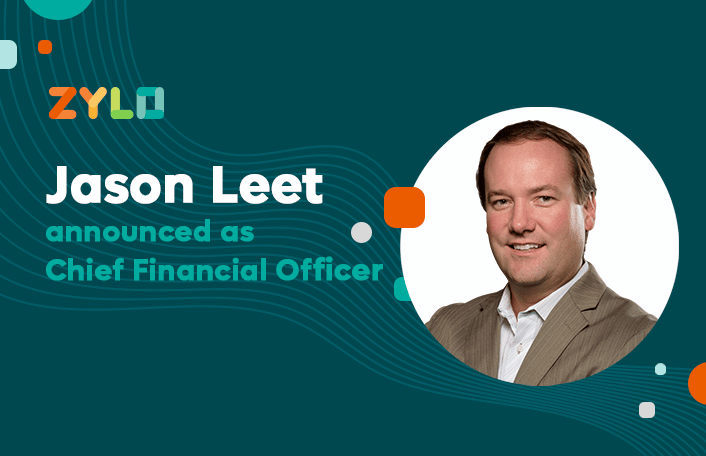 INDIANAPOLIS – December 15, 2022 – Zylo, the enterprise leader in SaaS Management, today announced it has named software industry veteran Jason Leet as the company’s Chief Financial Officer. In his new role, Jason will oversee the finance, legal and HR functions, leading Zylo in its next phase of growth.

Leet brings more than two decades of experience in finance across the technology industry. He most recently served as Senior Vice President of Finance at Salesforce, a role he held since 2013.  During his nine years at Salesforce, Leet, who joined the company via its 2013 acquisition of ExactTarget, helped scale its global finance organization by leading a team that supported numerous acquisitions and integration into Salesforce globally. Over his six-year tenure at ExactTarget, Jason helped the company scale up through multiple fundraising rounds, M&A, IPO and eventual acquisition by Salesforce.

“Jason’s financial and cross-functional executive leadership experience from Salesforce and high-growth tech companies make him an ideal fit. Given our potential and ambitions, his insights will be invaluable,” said Zylo CEO and Co-founder Eric Christopher. “Adding a CFO is also a signal to customers, for whom the role is strategic in terms of buying decisions. Today’s financial executive is responsible for every investment – including software. As more CFOs look to Zylo to drive down SaaS costs and operationalize renewals, Jason will help us capitalize on the market opportunity, enabling Zylo to scale to a global leader in the industry.”

Zylo, which helps organizations worldwide find, manage and reduce SaaS application spend, is fresh off a $31.5 million Series C fundraise led by Baird Capital’s Venture Team. Zylo is poised for significant growth as mid-market and enterprise companies across all industries reckon with the SaaS commitments made over the past few years. SaaS spend has reached $65 million per year on average, and most companies overspend on licenses by at least 15%.

“SaaS sprawl is a significant and growing challenge, and companies need better solutions. The traditional software gatekeepers in finance and IT aren’t effective against the land-and-expand model most SaaS companies employ,” said Leet. “I’ve seen firsthand how teams can ‘go rogue’ with software, making duplicative purchases and inadvertently setting their organizations up for costly autorenewals.”

Software purchasing became even more critical in the past few years as companies sought to prioritize new technology that helped keep their businesses running during the pandemic. However, this new environment contributed to accelerated SaaS spending and deployments that have lost efficiency and control, thus becoming its own challenge impacting companies globally. Zylo helps put finance and IT leaders in a stronger position. Instead of reacting to the risks and obligations of one-off software purchases, they can provide more strategic insights based on complete visibility into the organization’s SaaS licenses and usage.

“The current macroeconomic environment is a tailwind for Zylo’s growth,” explained Leet. “Companies have made massive SaaS investments since the start of the pandemic, and now many are belt-tightening heading into 2023. Zylo has the answer to SaaS overspend, and I can’t wait to get to work helping other finance leaders understand how powerful this solution is.”

Leet’s appointment and the Series C funding cap off a record-setting year for Zylo. In addition to significant increases in demand, new business and customer retention, G2 named the company as a leader in two categories: SaaS Spend Management and SaaS Operations Management.

About Zylo
Zylo is the enterprise leader in SaaS Management. Companies such as Adobe, Atlassian, Coupa, Doordash, Intuit, Slack, Salesforce, and Yahoo leverage Zylo’s enterprise-proven technology and unparalleled SaaS Management expertise to control the rising costs and risks of SaaS while improving software adoption by employees and driving innovation.

With more than 30 million SaaS licenses and $30 billion in SaaS spend under management, Zylo is fueled by more data than any other provider. Only Zylo’s enterprise SaaS management platform delivers 100% visibility into your SaaS footprint to drive actionable insights and automated workflows. Alongside the platform, Zylo offers a suite of spend optimization services to drive greater cost savings while freeing up resources, implementing a proven best-in-class approach to manage SaaS negotiations from end to end.